Jill McGown, who wrote a series with two great characters, Lloyd and Judy, has passed away. Julia Buckley has more in her blog.

Seems like in the past few weeks we've had several notable deaths: Kurt Vonnegut and Michael Dibdin, who wrote the Aurelio Zen series. Sad to think we'll no longer see new books from these authors.
Posted by Lourdes at 11:14 AM No comments: 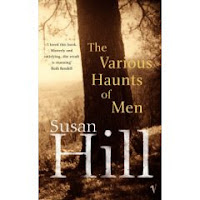 The Various Haunts of Men by Susan Hill
Protagonists: Chief Insp. Simon Serrailler and Sgt. Freya Graffham
Setting: Lafferton, England
Rating: 4.7
A woman vanishes in an area known as "the Hill." Freya uncovers other cases of missing people and the police soon have what appears to be a serial killer -- although no bodies. This is the first of the Simon Serrailler series, although this book is mostly told through Freya's eyes -- we even get to know Serrailler through the lovestruck Freya. Very much character-driven, the novel takes its time setting up the story -- and then hits you with a shocking ending.

The Mosaic Crimes by Giulio Leoni
Protagonist: Dante Alighieri
Setting: Florence in 1300
Rating: 2.5
An interesting premise: Dante Alighieri, as prior of Florence, solves two murders (the story opens with a mosaic artist killed inside a church, his face covered in quicklime). However, the author seems more interested in showing off his knowledge of Dante and Florence during the 1300s than in crafting a good mystery. As much as I like Florence, this book could have been trimmed by half (at least!).

O is for Outlaw by Sue Grafton (audio)
Protagonist: Kinsey Millhone
Setting: Santa Teresa, Calif.
Rating: 4.4
Kinsey's ex-husband is in a coma, shot with an old gun that had belonged to Kinsey. Kinsey picks up his investigation where he left off. Very nicely written, with a mix of humor (Kinsey getting a tarot card reading!), mystery and a bittersweet look at the past. One of Grafton's best so far.

What the Dead Know by Laura Lippman
Protagonists: Det. Infante, Det. Porter
Setting: Baltimore
Rating: 4.9
Thirty years ago, two young sisters were kidnapped. Now a woman turns up claiming to be one of the sisters, but is she really? The story moves back and forth in time, drawing us into the girls' family. Great characters, great plotting and great resolution. Lippman has been getting rave reviews, and now I see why.

Wolf to the Slaughter by Ruth Rendell
Protagonists: Wexford and Burden
Setting: Kingsmarkham
Rating: 4.7
Second in this series. A young woman is missing and a murder may have been commited in a room that is rented out by the hour. But there's no body and the only clue is a name. Excellent use of solid detective work, with a nice twist at the end.

Killjoy by Ann Cleeves
Protagonist: Insp. Stephen Ramsay
Setting: Hallowgate, England
Rating: 3.5
A young woman is killed during rehearsals at a community theater. Investigating, Insp. Ramsay runs into an old flame. Wish I could have liked this one better, but the characters were a bit flat and uninteresting.

Sea Fever by Ann Cleeves
Protagonist: George and Molly Palmer-Jones
Setting: Porthkennan, England
Rating: 4.0
Palmer-Jones and his wife board the Jessie Ellen along with other birdwatchers on a mission to persuade Greg Franks to visit his family. But as the fanatical birdwatchers are excitedly discovering a seabird never recorded before, someone is murdering Franks. Great mystery. This time around, really engaging characters.

In a Bleak Midwinter by Julia Spencer-Fleming (audio)
Protagonists: Rev. Clare Fergusson and Russ Van Alstyne
Setting: Millers Kill in upstate NY
Rating: 4.3
First in the series. Having read the most recent in the series and knowing where it's headed, this was still a good read -- for the characters. Plot was OK, although a tad long in some places. Highly recommend reading this series -- in order!