Pick of the Month -- The Mango Opera

The Mango Opera by Tom Corcoran (first in the series)
Protagonist: Alex Rutledge
Setting: Key West, Florida
Rating: 4.5
Corcoran's Mango Opera has struck all the right notes with me. A novel set in Key West is likely to do that, since you are guaranteed wacky characters and situations. But Corcoran goes beyond just mining the weirdness of Key West, vividly bringing out the character of the place -- and producing a fine, fast-paced mystery. Rutledge, a part-time crime scene photographer, is called out to a murder: his ex-girlfriend's roommate, who could have passed for a twin of the ex, has been murdered. Then, one by one, Rutledge's ex-girlfriends and ex-flings are either attacked or murdered (and, this being Key West, there are plenty of ex-partners). Rutledge would have been the likely suspect, except there are plenty of other suspects for him, the police and the FBI to consider -- even the last (maybe current?) girlfriend.

I am so glad to have found another great Florida writer. Corcoran has five more Alex Rutledge novels, so I have a feeling I'll be spending quite a bit more time in Key West, a nice rum drink in hand maybe.
Posted by Lourdes at 8:19 PM 1 comment:

Over at Moments in Crime, Barbara "Barfly" Fister, has written an eloquent essay on why she reads. And she's tagged me to play in a blog meme, so here goes:

In "Leave Me Alone, I'm Reading," NPR book reviewer Maureen Corrigan opens her book with: "It's not that I don't like people. It's just that when I'm in the company of others -- even my nearest and dearest -- there always comes a moment when I'd rather be reading a book." Growing up in a family of mostly non-readers, I thought I was alone in this burrowing of books, this need to escape into another life, even if for just a few minutes a day.

I don't know how I became a reader. My parents weren't big readers, though they did buy me books (including an encyclopedia set which they paid off in monthly installments) and took me often to the public library. At 9, already a bookworm, my mother thought the best way to explain my soon-to-be-arriving brother would be to take me to the library and find child-appropriate books on the birds and the bees. 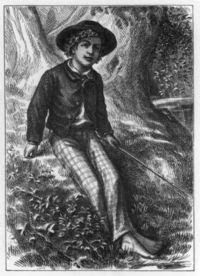 But, if anything, it was Mark Twain who really made me a reader -- specifically, Tom Sawyer. My life couldn't have been farther from Tom's life -- we didn't have any white-picket fences to whitewash (or con others into whitewashing). There were no caves to explore in Miami, Florida, and the closest to a river was the always-murky canal behind our house. But I reread Tom Sawyer over and over in elementary school, in between The Bobbsey Twins.

My love of reading continued unabated throughout junior high and high school, as I devoured history books, science fiction, mysteries, anything. I credit my love of reading to thinking I could write, too, and becoming a journalist. Now, as a copy editor, I read for work as well. But I still read for pleasure, mostly crime fiction these days. For me, it's the challenge of the whodunnit, the unraveling of a mystery, that draws me (and for that, I prefer the traditional British mystery, thank you). I love these mysteries so much that I've traveled twice to the U.K. on mystery-book tours.

People have asked if I would ever consider writing a mystery myself. Maybe, though it seems an awfully hard task. For now, I'm much happier just being a reader.
Posted by Lourdes at 11:03 PM 2 comments:

Ghostwalk by Rebecca Stott (audio)
Protagonist: Lydia Brooke
Setting: Cambridge
Rating: 3.5
Lydia Brooke is asked by her former lover Cameron to finish a book on alchemy and Newton that was almost completed by his mother, who recently died in suspicious circumstances (drowned, clutching a glass prism). Lydia takes on the job of ghostwriter, finding that Cameron's mother had made some ties to 17th-century deaths and very similar present-day deaths. Usually, while I love the gothic and historical mysteries, Ghostwalk seems to ramble on a bit too much, throwing in an ill-fated romance and a storyline about radical animal-rights activists. In the end, the story was just not haunting enough to move it into the category of great mysteries.

Sideswipe by Charles Willeford (third in a series)
Protagonist: Hoke Moseley
Setting: Miami and Riviera Beach
Rating: 3.0
Willeford takes two separate story lines and ties them up neatly at the end. An old man becomes caught up with a convict, and you know it isn't going to end well. In the meantime, Moseley goes off the deep end, deciding he doesn't want to be a police officer anymore. Still, he manages to solve a crime here and there.

Murder on the Ile Saint-Louis by Cara Black (seventh in the series)
Protagonist: Aimee Leduc
Setting: Ile Saint-Louis, Paris
Rating: 4.0
A while back, I had read another in the Aimee Leduc series and not been bowled over. Lucky for me that I tried this, the seventh in the series. The character has become more rounded and interesting, and the plot -- involving environmental activists, bombings and an unexpected dip in the Seine -- was a great read. In this book, Aimee, a computer security analyst, gets a late-night call from a woman, pleading for her to go down to her building's courtyard. There, Aimee finds a newborn. Aimee, usually dressed in chic Chanel dresses and Manolo Blahnik shoes, immediately falls in love with baby Stella, nevermind the spit-up on her designer dresses. With one of the best sidekicks in detective fiction, Aimee is off to try to find the baby's mother -- and solve a murder or two along the way.

Angels in the Gloom by Anne Perry (3rd in a series, audio)
Protagonist: Reavley siblings
Setting: St. Giles, England
Rating: 4.0
Each book in this series just gets better. In this one, Joseph Reavley, injured at the front, returns to the quiet village of St. Giles. Perry's descriptions of war were riveting in the previous book, but so are her descriptions of the desperation in the men and women left behind -- especially the women, many of whom have lost their sons and husbands in war, and who are assuming greater roles in business. Of course, even in a quiet town such as St. Giles, there's a murder -- one of the men working on a top-secret project expected to change the outcome of the war. As Joseph investigates, Matthew Reavley is falling in love with a double agent and trying to find the identity of The Peacemaker, the man who killed the Reavleys' parents and is trying to bring peace, even at the cost of England. These books are much more than just mysteries; they are a sympathetic look into the costs of a world war.

The Eye of Jade by Diane Wei Liang (first in the series, audio)
Protagonist: Mei Wang
Setting: Beijing
Rating: 4.7
When Mei Wang loses her job at the Ministry of Public Security, she opens her own detective agency (outlawed in China, so she has to call it information consultancy). Her first client is her uncle, who asks her to look into a Han dynasty jade stolen from a museum. This is so much more than a detective novel, though; the language is so detailed and so beautiful we feel we are reading a memoir -- the life of Mei's mother hangs in the balance after a stroke, and Mei's former-but-never-forgotten boyfriend returns for a visit from San Francisco. Author Liang, born in China and exiled after her involvement with the students' revolt that led to the Tiananmen Square massacre, has also written a memoir. Her second in the Mei Wang series, Paper Butterfly, is due out in May. I'm looking forward to reading both.

The Secret History by Donna Tartt
Protagonist: Richard Papen (narrator)
Setting: Vermont
Rating: 4.7
The murder happens on the first page of this book, but I was still spellbound enough to read the 500-page book in a few days. The novel unwinds everything that happened before -- what led a tightknit group of college kids to kill one of their own -- and what happens afterward. The group are scholars in classic Greek, and the story itself plays out like a modern Greek tragedy. This is a carefully constructed story, and well worth reading.


The Colony: The Harrowing True Story of the Exiles of Molokai by John Tayman
Rating: 4.0
For 103 years, until 1969, more than 8,000 people afflicted with leprosy were exiled by the government to a remote piece of land, surrounded by high cliffs, in what author John Tayman calls the "longest and deadliest instance of medical segregation in American history, and perhaps the most misguided." This is the story of that segregation. Tayman not only tells us the history, but gives us some of the personal stories as well. Some of the handful of residents still left on Molokai have panned the book, but I found it to be a sensitive and moving story of what happened there, and what the government allowed to happen.

This Month's Pick: The Girl With the Dragon Tattoo

By Stieg Larsson
Protagonists: Mikael Blomkvist and Lisbeth Salander
Setting: Hedeby Island, Sweden
Rating: 4.8
I'm always hesitant to read a book that is enthusiastically recommended as a "best" something. So when Ali Karim, an assistant editor at the e-zine Shots, praised The Girl With the Dragon Tattoo, calling it "one of the greatest crime-fiction novels I have ever read," well, I thought, I'm bound to be disappointed. But Ali was pretty close to the mark -- this is a great novel, an updated take on the locked-room mystery with some thriller elements thrown in.

The story revolves around the Vanger clan, which owns a once-great but fading corporation. The head of the family, 82-year-old Henrik Vanger, hires Mikael Blomkvist, a journalist who has just lost a libel suit and is facing jail time, to unravel a 40-year-old mystery: the disappearance of his niece, 16, from the family's secluded island on a day when the island's one bridge was inaccesible. Vanger fears one of his own family murdered his niece. Blomkvist is facing his own troubles: his magazine Millennium is fighting for its survival after the libel suit, and he's sure that the person he was found to have libeled -- industrialist Hans-Erik Wennerstrom -- is a guilty man. Vanger dangles him information about Wennerstrom and a fat paycheck if Blomkvist takes the job and moves to the island. So he does, and eventually hires as an assistant Lisbeth Salander, 24, a troubled young woman who is also a brilliant computer hacker. And so the fun begins ...

This is a massive 535-page tome (after all, we have to unravel all the family secrets), but it moves quickly, for the most part (dragging just a little at the end). Luckily, author Stieg Larsson wrote this as the first part of a Millennium trilogy (the English version of the second book will be released next January). Unfortunately, shortly after finishing the trilogy, Larsson, a Swedish journalist who battled racism and the far right, died suddenly of a heart attack. With only three books, Larsson indeed leaves behind a small legacy, but once that will only enrichen the crime fiction genre.
Posted by Lourdes at 8:50 AM 2 comments: