The Case of the Man Who Died Laughing by Tarquin Hall 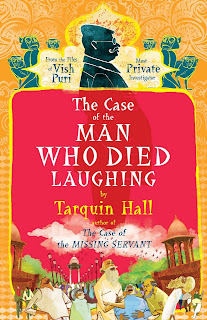 Dr. Jha, the Guru Buster who denounces frauds claiming to be in touch with the supernatural, dies while doing laughter therapy. An entire group of men see him murdered -- by a floating apparition, no less.

Vish Puri, of Most Private Investigators, also disbelieves in the supernatural and in those holy men who would extract large sums from the faithful, based on trickery. He investigates, along with his staff, Tubelight and Facecream. In the meantime, Vish's wife, Rumpi, and his Mummy-ji are off on their own, investigating a robbery that took place during a women’s house party.

While Vish doesn’t like to be compared to Sherlock Holmes, you can barely fault the people who do. After all, in one passage, Vish deduces from a glance: "His back was turned to the dhaba so that the detective was unable to see his face. But beyond the obvious -- that the man was in his early to mid-fifties, married, owned a dog and had reached the rendezvous within the past few minutes -- Puri was able to deduce that he was having an affair (there was a clear impression of an unwrapped condom in his back pocket) and had grown up in a rural area where the drinking water was contaminated by arsenic (his hands were covered by black blotches)."

Hall’s books are not deep mysteries. But they are delightful and whimsical, while also providing a look into the social mores of India.
Posted by Lourdes at 8:57 PM No comments: