Over at It's a Crime!, Andrew Taylor, author of the Lydmouth series, gives us his recommendations for Christmas books (be forewarned, some of them are pretty grim!) Other authors also weigh in, including Matt Beynon Rees, Zoe Sharp and Martin Edwards (I must read Peter Lovesey's The Secret Hangman!).

At Books to the Ceiling, the very well-read Roberta Rood gives us her Best of 2007, a two-part list (thanks to her, I now have a much longer list of books to read).

Writer Louise Penny (Still Life, A Fatal Grace and, soon to come to the U.S., The Cruellest Month, has a lovely blog in addition to her Web site. Life at her country home sounds almost as idyllic as Three Pines!

Our roundup has to include Carnival of the Crime Minds, which is making its way around the world with guest bloggers.

And, finally, don't miss In For Questioning, a great blog that provides podcasts of mystery authors and others involved in the book world, including Maddy Van Hertbruggen, founder of 4 Mystery Addicts, an online discussion group with about 993 members (at last count). Maddy tells us which fictional character she'd be afraid of running into on the street.
Posted by Lourdes at 2:28 PM 1 comment:

A Fatal Grace by Louise Penny
Setting: Three Pines, Canada
Protagonist: Insp. Armand Gamache
Rating: 5.0
CC de Poitiers, the villain in the tiny fictional town of Three Pines, is electrocuted at a Christmas curling competition. Suspects abound, and in addition to the central mystery, there are other smaller mysteries surrounding the plot, including one that may impact Gamache's career. This novel is set around Christmastime, and it was just wonderful to read it in the last days of 2007. A great way to end the year.

Naked to the Hangman by Andrew Taylor
Setting: Lydmouth, Wales
Protagonists: Det. Richard Thornhill and journalist Jill Francis
Rating: 4.5
This is the eighth in Taylor's Lydmouth series (one of my favorites). This one takes a different turn, going back to Thornhill's past as an officer in Palestine. His actions then haunt him now, as a fellow officer appears in Lydmouth. We don't get too much of the storyline between Thornhill and Francis, but still an excellent (as always) book in the series.

Sanibel Flats by Randy Wayne White (first in series)
The Heat Islands by Randy Wayne White (second in series)
Protagonist: Marion "Doc" Ford
Setting: Sanibel Island, Florida
Rating: 3.5, 3.7
Read these books for their wonderful portrayal of Florida, a Florida that is fast disappearing. White's description of a fast-moving thunderstorm over open waters is reason enough to read The Heat Islands. The plots are OK and the characters a bit skimpy or cardboard-like, but I still have high hopes for this series (which I hope to continue reading). 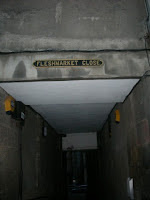 Fleshmarket Alley by Ian Rankin
Protagonist: Rebus and Siobhan
Setting: Edinburgh
Rating: 3.7
I was blown away by the early Rankin books; this one failed to capture me. Maybe I like Rebus too much for him to share the page with Siobhan. Still, it's interesting to see Rankin weave a greater plot out of a small, mundane thing. In Edinburgh, I visited the real Fleshmarket Close (Alley for us Americans). Apparently, Rankin was none too happy with the American name change of his book. 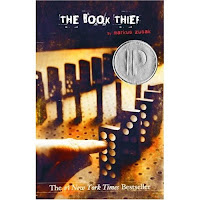 The Book Thief by Marcus Zusak (on audio)
Protagonist: Liesel Meminger
Setting: Nazi Germany
Rating: 4.0
This is a Young Adult book, but so many Older Adults recommended (and raved) over it, that I sought it out. When Death comes to take Liesel Meminger's brother, he finds himself drawn to Liesel's life, especially after she steals her first book at the gravesite, "The Grave Digger's Handbook." Liesel can't read yet, but her kind foster father soon teaches her how to read, and she never looks back. A touching story, with beautiful prose.

Two Way Split by Allan Guthrie
Protagonist: Robin Greaves
Setting: Edinburgh
Rating: 3.3
Guthrie's been swept up with the newest of the "tartan noir" writers (although, isn't all Scottish crime fiction pretty much gothic or noir?). Robin is an armed robber who thinks his wife is sleeping with his partner in crime. Oh yeah, and Robin is also schizophrenic and has stopped taking his medication. Noir is not my cup of tea, but this character was so different that I was hooked until the end.

The Virgin of Small Plains by Nancy Pickard
Protagonist: Cast of characters
Setting: Small Plains, Kansas
Rating: 3.1
On a winter night, a teenage girl is found dead in the snow. It seems no one knows who she was, but the townspeople bury her and come to revere her, as it's believed that she performs miracles. But 17 years later, long-ago secrets start to surface. Turns out plenty of people knew who she was. Despite some very nicely written scenes, this novel was disappointing. While the cover touts a "novel of suspense," there was little mystery in it, the characters' actions didn't always seem plausible and there was just a tad too much of the Harlequin-romance-plotting in it for me.

Catch Me When I Fall by Nicci French (on audio)
Protagonist: Holly Krauss
Setting: London
Rating: 3.0
Holly, who is manic depressive, is a woman out of control, sleeping with a man not her husband, gambling (and losing 11,000 pounds). The first part of the book is told through Holly's eyes and we feel sympathetic for her, as she is stalked by Rees (the man she slept with) and by loan sharks. Then the point of view changes to Meg, her friend and business partner, after Holly attempts suicide (a bit confusing, as I feel asleep with the iPod in my ear). From there, the book picks up, and turns into a thriller. All is not what it seems, especially after a second suicide attempt. I'd heard a lot about this husband-and-wife writing duo that goes by one name, and I hope to read more of their books. This one, though, by all consensus, seems to be a weak spot among their works.