Blood on the Tongue by Stephen Booth 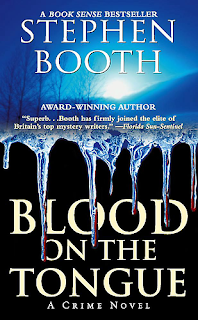 "He was climbing steadily higher toward the top of Irontongue Hill, where the wreckage of Sugar Uncle Victor lay. In the gullies, snow already lay over a thin layer of ice that cracked and gave way under his weight. In the deeper areas of snow, his feet plunged in. But on the smoother areas he was aware only of the crackle and squeak as the snow compressed under his boots."

Protagonists: Diane Fry and Ben Cooper
Setting: Peak District, England
Rating: 4.5
It’s a brutal winter in the Peak District, and bodies are being found all over the place: a woman’s body in a snowdrift; a man’s body alongside the road on Snake Pass, which is very treacherous during the worse of the season; and another body inside the wreckage of a World War II bomber.

As Det. Sgt. Diane Fry investigates those, Det. Constable Ben Cooper is looking at a cold case of sorts: the disappearance of a WWII bomber, Danny McTeague, who vanished shortly after his plane crashed on Irontongue Hill in the changeable moors. McTeague’s granddaughter has received a parcel in the mail -- the pilot’s old medal, mailed from the area. Of course, the cases, new and old, will all coalesce in the end.

The third in the series, this is the strongest Booth book yet -- a very good police procedural, with an interesting cold case (which I always love), and wonderful, atmospheric writing. The maybe or maybe-not Fry/Cooper relationship is, thankfully, not delved into, making for a more potent mystery.
Posted by Lourdes at 1:07 PM No comments: