Books to the Ceiling has a great post on The New York Times' 100 notable books for 2008, which include only four crime fiction books. Writes blogger Roberta Rood: "I cheerfully acknowledge that most of the fiction I read is crime fiction. IMHO, that’s where you’ll find great writing, great characters, terrific stories - and blessedly little self-conscious, hyper-literary posturing."

There are all sorts of blog challenges. Here's one I may or may not officially join for 2009: Read your own books. The truth is that was my own personal challenge this year. I have at least 200 unread books (OK, closer to 300). I had thought to make a dent in them, but I kept adding books faster than I read them. And I kept hearing about books that I had to check out of the library. Considering I only read between 60-70 books a year, it's going to take a while to winnow down that pile. Plus, there's also a 2009 Support Your Local Library challenge. What's a reader to do?!

Finally, I came across the literature map quite by accident, but it's a fun little spot. You type in the name of an author and suddenly all these names will float across your screen, with the most closely related near your original name. It's fun to play with, even if you don't agree with all the choices.
Posted by Lourdes at 12:46 PM No comments:

Pick of the Month: The Writing Class by Jincy Willett

Every once in a while comes a book that I drag from room to room, because it literally is hard to put down. The Writing Class is that book. Willett takes a conventional murder mystery format (the closed community), but gives it a fresh, dark humor twist. Amy Gallup is a fiction writing teacher at an extension college. She's also, as Willett writes, a "bitter, peculiar person" who lives alone with her dog and hasn't written herself for years. But, for once, Amy finds that she has a writing class that really clicks -- 13 people of varying degrees of talent. Yet almost immediately class members and Amy start receiving poison pen letters, then prank calls. It spirals out of control, until one class member is seemingly murdered. The police won't investigate, thinking it's an accident. So it's up to the class members, which include the killer, to figure out the mystery.

Willett has drawn each character so well that you really don't want any of them to be the murderer. Throughout the book, Amy draws up lists for her blog. So I, pen in hand, was soon making a list of each class member, trying to figure out the whodunnit (I never did). A few pages later, Amy herself has drawn up the same list (still no help).

The book also works on another level, for whoever has ever wanted to be a writer or just loves language. Willett includes parts of students' stories, some very good, some so bad they make you laugh. The critiques and Amy's lessons make you feel part of the class, as well as providing clues about each character.

The Writing Class hasn't gotten much buzz, which is unfortunate. This is a funny, well-crafted mystery, very worthy of reading.
Posted by Lourdes at 1:14 PM No comments:

No Time for Goodbye by Linwood Barclay (audio)
Protagonist: Cynthia and Terry Archer
Setting: Milford, Connecticut
Rating: 5.0
One morning, 14-year-old Cynthia wakes up and her entire family has vanished from their suburban home – no note, no bodies. For 25 years, she wonders and waits. But after a television show does a story on the disappearance for the 25th anniversary, strange occurrences begin to happen. Cynthia’s husband doesn’t know whether to believe his wife – or believe she’s making things happen. To say anything else about the plot would be unfair. But this thriller is a grabber – from beginning to end, even when you figure out what’s really happening. This will make my top 10 reads for the year.

A Death in Vienna by Daniel Silva (audio)
Protagonist: Gabriel Allon
Setting: Vienna and Venice
Rating: 4.5
After an explosion at the Wartimes Claims and Inquiry office, spy and art restorer Allon is sent to Vienna – a bit unwillingly, as this is where his wife and son were victims of a car bomb. There are also other reasons why Allon is not welcome in Vienna. Those reasons intensify when Allon begins hunting down a Nazi official. Amid all this, we learn Allon’s mother was a Holocaust survivor. Silva does wonderfully in weaving all the threads together, in a powerful, moving spy thriller. Although this is the last of three interconnected novels, it stands very well alone.

A Carrion Death by Michael Stanley
Protagonist: Assistant Police Superintendent David “Kubu” Bengu
Setting: Botswana
Rating: 3.7
This is the debut novel by authors Michael Sears and Stanley Trollip, and introduces Kubu, whose nickname means “hippo,” appropriate to the detective, who is always thinking of his next meal. But Kubu is also a thinking detective, and watching him connect the dots is a delight in this novel that opens with a body found in a remote gaming area, hyenas grazing on it. The case keeps returning to the influential Botswana Cattle and Mining, and the bodies keep piling up. Although I thought the pace lagged at some points, overall I found it an entertaining read – and the setting of Botswana add to the pleasure.

Email ThisBlogThis!Share to TwitterShare to FacebookShare to Pinterest
Labels: A Carrion Death, A Death in Vienna, Daniel Silva, Linwood Barclay, Michael Stanley, No Time for Goodbye

Books for the Holiday 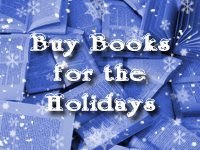 My blogging friend Amy, who has done much for promoting book blogs, now is promoting buying books for the holidays. Her new blog has recommendations for all ages.

Now this is nothing new in this household. My wish lists have always included books. And I love to give books -- especially to the nieces and nephews. This year, older stepson-to-be mentioned he liked the Hardy Boys. Mysteries! My favorite genre! Coincidentially, my friends at 4Mystery Addicts supplied a list of mysteries for young readers at about the same time. You can guess what he'll be getting from me.

But holiday books don't always have to be fiction. My brother and sister-in-law often get books on modern architecture or interior design (they hope to build a modernist home in upstate New York). My sister and mother get books on scrapbooking. My brother once gave me a lavish cookbook/travelogue on Spain. Cookbooks often make wonderful gifts.

I do have one recommendation this holiday season: Green Christmas: How to Have a Joyous, Eco-Friendly Holiday Season by Jennifer Basye Sander and Peter Sander. Some of their tips will make you rethink what the holiday season really is about.

Have a happy one!
Posted by Lourdes at 11:54 AM No comments:

Guernsey Literary and Potato Peel Pie Society by Mary Ann Shaffer and Annie Barrows (audio)
Protagonist: Juliet Ashton
Setting: London and Guernsey island
Rating: 4.5
Juliet is a journalist who usually writes light, fluffy stories about the war. After the war, she seeks something of more substance to write about -- and stumbles upon the Guernsey Literary and Potato Peel Pie Society, formed when the island was under Nazi occupation. Eventually, Juliet decides she has to leave London and visit the island to write her book. The story is told through letters, telegraphs and journals, and is not so much about books as it is about connections between people.

The Black Path by Asa Larsson
Protagonist: Rebecka Martinsson and Insp. Ana-Maria Mella
Setting: Sweden
Rating: 3.7
A woman is found dead on a frozen lake, and police soon discover she was a key player in a large mining company. That's the crime, but the book also delves into the minds of many of its characters, including Rebecka, who has just returned to work after being the victim of a crime herself (I do feel as if I missed something in not reading the first book in this series). Other people raved about this book. For me, it was a good read, but it is a dark and often uncomfortable book to read.

Quite Ugly One Morning by Christopher Brookmyre (audio)
Protagonist: Parlabene
Setting: Edinburgh, Scotland
Rating: 3.2
When his neighbor is found dead, and journalist Parlabene ends up as a suspect for about a day, he decides to investigate. This book has awful amounts of bloodshed, throw-up and fecal matter -- and that's just in the first chapter. If you can handle that, there's also a dark sense of humor and great writing. While I could appreciate the book, not an author I'd probably return to.