No Corners for the Devil by Olive Etchells 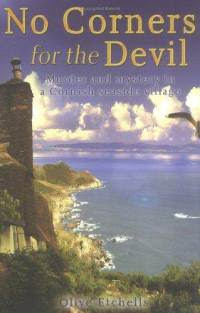 Sally and Rob Baxter and their three children have moved to a Cornish sea village, where they live in a roundhouse and rent out vacation cottages on the property. As the townspeople like to remark, there are “no corners for the devil in a round house.”

Yet, there is evil out there. Someone has killed a teenage girl not far from their home, along the beach below their home. Their older son, Luke, is the last to have seen the girl and becomes a suspect. Rob begins to act distant and doesn’t rush to support Luke, leaving it up to Sally to deal with the police.

Sally (through whose eyes much of the story is seen) trusts the detective in charge, DCI Channon. There’s even a spark between the two, although neither acts on it. If there’s any fault with this novel, it’s the shifting point of view. Much of it is through Sally’s eye, someone who is connected to a suspect. Then the book shifts to Cannon, as the book becomes more of a police procedural. It’s a strange shift, although it didn’t really affect my enjoyment too much. I do wish, however, that I could have gotten to know Channon and his sidekick, Sgt. Bowles, a bit more. Hopefully I will, in later books.

This first book has all the marks of a promising series. It's a pity, therefore, to see that only three were written in this series.
Posted by Lourdes at 11:22 PM No comments: