Protagonist: Willa Jansson
Setting: Cuba and Mexico City
Rating: 4.5
When attorney Willa Jansson's "superlefty" mom disappears in Cuba, Jansson sets out to find her, traveling back and forth between Havana and Mexico City. After several murders, former flame Homicide Lt. Don Surgelato joins her. I liked this book for several reasons: there's quite a bit of humor among the plot twists and turns (sort of like a Kinsey Millhone abroad) and because she depicts the Cuba of the 1990s with harsh accuracy. The hotel Willa stays at could have been the same one I once stayed at: one with a small, drab hotel room that reeked of mildew. Says Willa about a second trip to Havana: "I dreaded returning to Cuba, not because America had demonized it for forty years, but because of the scarcity and sadness hanging over it, swallowing up residents and tourists alike." This is the seventh and, as far as I can tell, the final Willa Jansson book in the series. It's a shame, because I would have liked to have read much more about Willa.
Posted by Lourdes at 12:08 PM No comments:

When The Shadow of the Wind came out a few years ago, I devoured the novel, discussed it with friends, recommended it to other book lovers. I was smitten. Comes now the sequel, The Angel's Game, the story of a writer (David Martin) who sells his soul -- quite literally -- for immortality. He's writing pulp fiction for a magazine and living in poverty when a publisher comes calling with a deal: write a book creating a new religion and David will no longer have to worry about money - or his terminal illness. This publisher, Andreas Corelli, wears a lapel pin of an angel, but it turns out he is quite the opposite.

The story had several elements that should have enthralled me: it is high gothic, as lyrical as The Shadow and featured the Semperes and the Cemetery of Lost Books from the first book. However, the story failed to capture me. I put it down several times to read other books -- always a bad sign that I'm bored with a book. I did, however, stick with it -- this is the writer of one of my favorite books, after all. And the book does pick up in the second half. Still, the story is far darker than The Shadow and relies on a great amount of "woo-woo," some of it just too hard to believe.

Yet, given the many faults I found with it, the story did eventually ensnare me. No, it's not a great book; it's one that lives in the shadow of Ruiz Zafon's first book. Still, a good read.
Posted by Lourdes at 4:38 PM No comments:

The Sweetness at the Bottom of the Pie by Alan Bradley 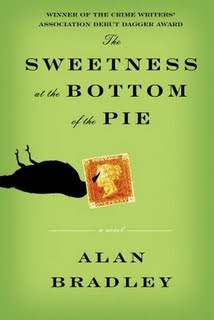 Flavia de Luce is a precocious 11-year-old chemist whiz who turns to detecting when her father is jailed for the murder of a man found in their garden. She was also the only one around when the man uttered his one dying word: “Vale.” This sets Flavia on a hunt for the truth, pigtails flying behind her as she zips through town on Gladys (her bicycle). The best part of this book are the eccentric characters which populate Bradley’s book (which includes Flavia’s two older sisters, who she is always tormenting – when they are not tormenting her). But there’s also a fine plot – involving a rare stamp stolen years ago and another death. And it turns out the man found dead in their garden was once a close school friend of her father’s, before they had a falling out. And so the plot thickens. This book utterly charmed me – and apparently others. At least two more books featuring Flavia are in the works.
Posted by Lourdes at 1:03 AM No comments:

Email ThisBlogThis!Share to TwitterShare to FacebookShare to Pinterest
Labels: Alan Bradley, The Sweetness at the Bottom of the Pie

River of Darkness by Rennie Airth

This is the first of a trilogy, set in the years immediately after World War I, where both police and criminal have been affected by the war. Madden, whose wife and child died of influenza, carries the scars of wars, physically and emotionally. The criminal, a serial killer, also carries scars from long ago. Someone is killing entire families, but especially targeting the women, it seems. Madden and his team -- which includes Chief Inspector Angus Sinclair, young Detective Constable Billy Styles and, eventually, village bobby Will Stackpole -- methodically work to discover the identity of the killer and find him. This is as well done a police procedural as I've ever read, with the added layers of psychological mystery, wartime horrors and even romance for Madden. Before I'd ever finished it, I already had book two in hand.
Posted by Lourdes at 12:19 PM No comments:

Dying to Sin by Stephen Booth

When construction workers uncover a skeleton at Pity Wood Farm, police are brought into the muddy, dilapidated farm to uncover the mystery of who this person is, as well. One of the farm's owners is dead, the other is an elderly man in a home, suffering from dementia. And the town, closed-mouthed to outsiders, isn't likely to offer up clues. Booth's series (this is the eighth) is very atmospheric, and this book doesn't disappoint in that regard. You can almost feel yourself mired in the mud along with police, or lost in the fog with Ben and Diane in one pivotal scene. However, I found the main characters' lives to have become, well, a bit dull in this book. Hopefully, that'll change in the next book.
Posted by Lourdes at 12:01 PM No comments: