At Risk by Stella Rimington

Going into this novel, all I knew was that author Stella Rimington was former director-general of Britain's MI5 Security Service, the first woman to head the agency. I didn't expect much in the way of writing. Fortunately, I was wrong.

In her first book (she's now written five) Rimington has crafted a taut, well-written spy thriller with a strong female protagonist, Liz Carlyle, a 34-year-old agent-runner for MI5. Liz is a no-nonsense type of person, who puts personal relationships second to her work.

In this first book, post-Sept. 11, Liz and her colleagues are on the hunt for an "invisible" -- "the ultimate intelligence nightmare: the terrorist who, because he or she is an ethnic native of the target country, can cross its borders unchecked, move around that country unquestioned, and infiltrate its institutions with ease." There are actually two terrorists who have teamed up. For what purposes, we don't know immediately. What helps elevate this beyond a typical spy thriller are the well-drawn characters, including the two terrorists. In alternating chapters, we get their viewpoint, and a glimpse into what drives them.

Most of the procedural aspects also ring true and, except for a slightly over-the-top denouement, the story seems a realistic one. If you're looking for a smart spy thriller, stop right here.
Posted by Lourdes at 11:46 PM No comments:

Mayhem in the Hamptons 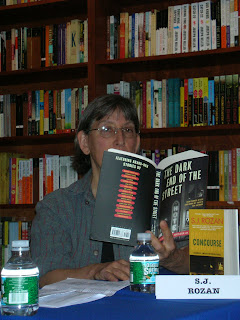 For the second year in a row, the BookHampton stores in the Hamptons have sponsored some of the most notable mystery authors from New York City and Long Island at a series of talks at their three stores.

One of the most interesting of those this weekend was entitled, "What Did I Do: Choosing a Victim," with authors Nelson DeMille, S.J. Rozan (in photo), Alafair Burke, Linda Fairstein, Tasha Alexander and Andrew Gross speaking on how they pick their victims, as well as the villian. The authors acknowledged that, these days, their victims are often sympathetic people. Burke explained that, as a reader, she was tired of the victim just being "victim number 7 -- and they had no tie to the life that was lost. It was always important to me that the loss of life would be depicted."

Linda Fairstein, a former prosecutor, said she hated "flat stick characters."
"I want the flesh and blood of characters, and what that had to do with the killing," she said. "Juries don't like 'bad' victims," such as prostitutes, so as a lawyer, it was her job to "learn their life." In fiction, she does the same: "It's always important for me to create that character fully."

Even when the victim is not a good person, the authors agreed that character had to be fleshed out. Said Rozan: "You don't need to have great sympathy for the victim. You just need to understand who he is, you have to establish humanity."

In the British tradition, DeMille said, you had a murder in the library and "38 people wanted the victim dead....But if someone like a drug dealer is killed, no one else cares about him, but the detective does. That's his job."

Villians are just as important.

For Alexander, in writing the villian it's "more interesting to have a villain who's been pushed and pushed. You get a reader not to sympathize, but to understand."

Said Gross: "Good guys are static. They provide the moral lens you look through. Bad guys are the ones who create the energy of the book. That's the character the readers will be turning the page for."

And, the authors agreed, God help the writer who picks an animal as a victim. DeMille spoke about a novel in which his hero killed three dogs. "I had so much bad reaction," he said. "But all the murder and mayhem in the book -- no one noticed."
Posted by Lourdes at 8:55 PM No comments:

Books set in the Hamptons

Lately, it seems the Hamptons has been attracting more than celebrities and Wall Street types. Crime fiction authors, too, find these East End towns of Long Island attractive. And so murder comes to the Hamptons.

Chris Knopf brings us wise-cracking, former boxer and former engineer Sam Acquillo in The Last Refuge (see review here), Two Time, Head Wounds and Hard Stop, with a spinoff series featuring Acquillo friend and lawyer Jackie Swaitkowski in Short Squeeze. Knopf, who has a home in Southampton, creates lovely images of Little Peconic Bay. But that natural beauty is in opposition to the thugs and killers who also populate the books. Knopf's Hamptons is not that of the rich and famous who crowd it during the summer, but of the blue-collar worker who lives there year-round.

In that vein, but much darker, are Daniel Judson's noir thrillers (not a series, but all set in the Hamptons): The Bone Orchard, The Poisoned Rose, The Darkest Place, The Water's Edge and The Violet Hour (see review here). His Hamptons are almost unrecognizable: deserted, dark streets late at night, haunted characters and bad guys galore -- the body count can get quite high in a Judson book.

Amagansett by Mark Mills, published in 2004, also focuses on the working-class, especially the fishermen of Long Island. This standalone is set in the summer of 1947, and much of it deals with fishing traditions and the hard life of these men, who must also battle those wanting to place restrictions on their livelihood. There is, of course, a mystery here. The book opens with two fishermen pulling in a net, only to find a beautiful -- and dead -- woman tangled in the net.

Each author writes in a very different style, but they all capture the Hamptons in a real-life way.
Posted by Lourdes at 8:00 PM No comments:

A beautiful graduate student, Marion Summers, suddenly suffers a seizure in the reading room of London Library, and dies. The cause: arsenic. While arsenic is no longer readily available, a few of the suspects do have access to it. Even stranger: Marion had been studying the pre-Raphaelite painters, who did use arsenic in their paints and for medicinal purposes.

Did Marion kill herself? Although it seems to be a suicide, Kathy Kolla thinks not, and she continues investigating the many suspects: Marion's research tutor, her stepfather, her lover and a strange stalker. This is a strong modern police procedural, but also a good British traditional story, with echoes of the Golden Age mysteries.

We also get strong characters in Brock, who has insecurities about his current relationship with Suzanne, who has a personal interest in the case, and in Kathy, as we watch her first tentative steps in a new relationship. This is the 10th book in the series, but the first I've read. There's enough backstory that I never felt lost.
I'm only wondering why it took me long to read a book in this series. If you like British traditional mysteries (and I love them), I highly recommend this book.
Posted by Lourdes at 12:32 PM No comments: