The Reckoning by Jane Casey 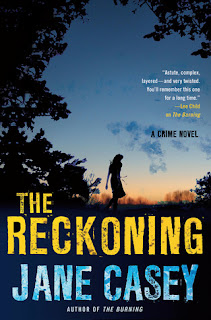 In this London police procedural, someone is torturing, then killing, sex offenders, specifically men who target preteen girls. Author Casey leads us down one path, sensitively detailing the lives of the victims and their families, only to stop mid-book and suddenly take another road: The man behind the killings is caught, and he has a compelling reason for having murdered those men.

Now Detective Constable Maeve Kerrigan and the rest of the police team are thrust into another direction that leads them to the search for yet another killer. Aside from a gripping plot, Casey writes authentic characters. Maeve Kerrigan, a young, pretty policewoman, is still proving herself to male colleagues; as part of this, she hesitates to have a full relationship with a fellow detective (their off-again, on-again relationship is a central part of the book). In this investigation, she’s paired with Detective Inspector John Derwent, who has a reputation for being aggressive and abrasive; he cuts Kerrigan very little slack. And there’s Superintendent Godley, whose usual by-the-book investigating takes a sudden turn with this case. The characters are drawn in such shades of grey that, as a reader, it’s hard to anticipate what they will do next, creating an extra layer of tension.

The Reckoning is Casey’s third book (the second featuring Kerrigan), and the author is quickly gaining notice. She’s been compared to Nicci French, Sophie Hannah, and Tana French—and the comparisons are fitting, for this strong writer. In fact, the Kerrigan books seem set to become a series. Let’s hope it’s a long one; Kerrigan and the rest of her colleagues will easily draw you into their lives
Posted by Lourdes at 11:54 PM No comments: