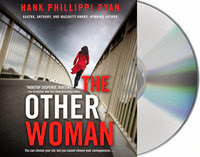 As a newspaper journalist, I also really enjoyed the descriptions of journalists. Newspapering is far from a glamorous life, and we see Ryland having to share a desk with another reporter and subsisting on drive-through tacos. Then again, you can also feel the adrenalin flow as she works on a big story, the magical part of journalism.
Posted by Lourdes at 12:43 AM No comments: