J.B. Thompson has a great interview with Robert Fate on her blog. Fate's two books, Baby Shark and Baby Shark's Beaumont Blues, have been getting a lot of buzz on an online mystery discussion book. They center around a teenage pool hustler who is out to avenge her father's death. I have the books, so what have I been waiting for to read them?

For the true book addict: A New York Times article about LibraryThing. If you have 2,956 books (as one client does), this is where you can go to catalog them and talk about them with others.
Posted by Lourdes at 6:48 PM 1 comment:

Started the month out in Paris -- in mind, if not in body.

Aimee is a computer forensic detective, along with her partner Rene, a dwarf. In this, the first in a series of now seven books, a Nazi hunter asks Aimee for help in finding someone. It leads to murder, of course, as well as to Aimee's involvement with a neo-Nazi group and some over-the-top action scenes in high heels and a tight skirt. The descriptions of Aimee and Rene hacking into government and other databases was interesting -- not usual in gumshoe novels, but realistic and yes, even tension-filled. I look forward to reading Black's other novels, all set in a different part of Paris.

Knots and Crosses by Ian Rankin
Protagonist: Det. John Rebus
Setting: Edinburgh
Rating: 4.5
It's taken me a while, but finally I've gotten around to reading Rankin. Not only that, but I plan to read his series in order, and so started with this first one. Rebus is not entirely new to me, as I had watched the BBC series, but it is a somewhat different Rebus than the TV version. In this first book, Rebus has been getting cryptic, anonymous notes with either knots or crosses in them. Almost too late, he realizes they are tied in to the person who has killed four girls. Some elements struck me as too far-fetched: that he would suddenly know the killer under hypnosis. Yet, still a solid police procedural. And the book did win the Gold Dagger (awarded in Britain to the best new crime novel). I'll soon be on to Rankin's second.

Hide and Seek by Ian Rankin
Protagonist: Rebus
Setting: Edinburgh
Rating: 4.9
Second in the series. Rebus investigates a junkie's death in an Edinburgh housing complex, but there's much more to the death and soon Rebus is seeking out his own "Mr. Hyde" in the city of Edinburgh. In just two books, Rankin has already developed one of the most interesting characters in mystery fiction.

Tooth and Nail by Ian Rankin
Protagonist: Rebus
Setting: London
Rating: 4.5
Third in the series. Rebus is asked to help London police find a serial killer, based on his one success in a previous case (in Knots and Crosses). Rebus doesn't feel like an expert, but he'll be damned if he doesn't prove himself. With his ex-wife and daughter now living in London, there's also family problems to unravel. Even when he throws in a car chase at the end, Rankin adds some unusual twists and turns.

In the Company of the Courtesan by Sarah Dunant (on audio)
Protagonist: Bucino Teodoldo and Fiammetta Bianchini
Setting: Venice
Rating: 4.8 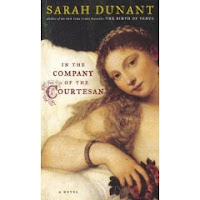 After the sacking of Rome in 1527, courtesan Fiammetta and her dwarf servant Bucino escape to Venice with the clothes on their back and gems that they have swallowed in their stomachs, to start anew in Venice. There, they meet with La Draga, a blind healer who helps Fiammetta regain her beauty. Dunant has written a little masterpiece. Using a combination of real and fictional characters, she crafts a story of Venice in the 1500s (in her version, Fiammetta is the model for Titian's Venus of Urbino). But more than that, the story, narrated by Bucino, is a tale of love, loyalty and survival.

The Art of Detection by Laurie King (on audio)
Protagonist: Kate Martinelli
Setting: San Francisco
Rating: 4.6
King merges characters from her two best-known series: Martinelli and Sherlock. There's a story within a story -- a recently-discovered Holmes story that may have been written by Arthur Conan Doyle. The Martinelli character is very likable, a detective trying to balance family and work, but driven to find the killer. It was the Sherlock story, though, that really elevated this mystery for me.

N is for Noose by Sue Grafton (on audio)
Protagonist: Kinsey Millhone
Setting: Noda Lake and Santa Teresa
Rating: 4.3
Kinsey Milhone is like an old friend, and it's always interesting to see what scrapes she gets into -- even when you know where the story is headed. In this one, Kinsey is hired for what seems a straight-forward investigation: a wife wants to know what was troubling her husband, a police officer, before his sudden death of a heart attack. But soon, Kinsey finds herself being shadowed by a black van and beaten up in her hotel room. 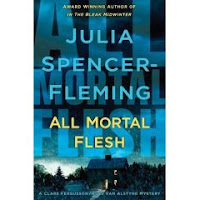 Fifth in a series with Clare Fergusson, an Episcopal priest, and Russ Van Alstyne, the police chief. They've got troubles: they've fallen in love, but Russ is married. Then Russ' wife seems to have been murdered in their house. First, Russ, and then Clare, are suspects. This novel, nominated for a Gumshoe Award, has many twists and turns, with a grim ending. I can only hope that Spencer-Fleming has another in a series planned.

There's nothing like an unsolved crime to keep interest alive. Now a movie comes out about the Zodiac killer, and we learn that it's more than just a little interest. For many people, it's become a full-time obsession. At the Washington Post, this story about Robert Graysmith, who has written a book on the case. And at NPR, this fascinating look at "Zodiac hunters."
Posted by Lourdes at 10:53 PM No comments: