One Was a Soldier by Julia Spencer-Fleming

In what may be her best book to date, Spencer-Fleming writes about the soldiers who return from war, and the scars they carry, emotional as well as physical. Clare Fergusson is among those -- she has returned from an 18-month tour in Iraq and is suffering from flashbacks; she can't function without taking uppers, downers and painkillers, mixed with alcohol, a secret she hides from everyone. She join a veteran's support group where she finds four others in similar situations: police officer Eric McCrea, who was an MP and who is unable to control violent tendencies; Will Ellis, a young man who returned as a double amputee; doctor Trip Stillman, who has suffered a brain injury and is hiding his memory issues from patients and family; and bookkeeper Tally McNabb, who had an affair with a fellow soldier. One of these people will die.

When Russ rules the death a suicide, Clare and her fellow vets disagree, and begin an investigation of their own. While there's some friction between Clare and Russ, most of the will-they or won't-they aspect of previous books is missing -- which is a good thing. Spencer-Fleming concentrates more on the mystery plot and presents us with a gripping character study of returning vets. There's still some romance, of course, and series readers will appreciate this book, too.
Posted by Lourdes at 11:42 AM 1 comment:

Email ThisBlogThis!Share to TwitterShare to FacebookShare to Pinterest
Labels: Julia Spencer-Fleming, One Was a Soldier

Talking With the Tough Guys 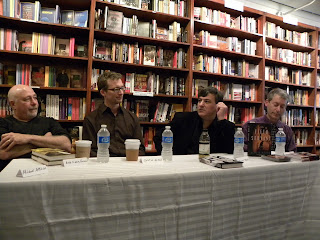 When it comes to noir, a long-practiced form of fiction, both in book and film, how do modern-day authors put their stamp on it? That was part of a panel today at Mayhem at Bookhampton, an event at several of the bookseller's Hamptons stores. On the panel (and in photo above), from left: Reed Farrel Coleman, Justin Evans, Wallace Stroby, Ken Wishnia and Michael Atkinson (not pictured).

Coleman, who writes the popular Moe Prager series, said noir was fresh when Raymond Chandler and Dashiell Hammett were writing, and that today's writers "work with the same themes, but we can't get away with writing those books...The themes remain the same, how they play out is different."

Atkinson, who has written two books starring author Ernest Hemingway, said the way to keep these books fresh is to focus on the characters. His Hemingway is not only the larger-than-life author, but a more nuanced character.

The authors themselves don't think of themselves as tough guys. Said Evans, who second book has just been released: "I am ever so not tough. My characters can't even change a tire." For most, being tough meant "getting through the day ... it's more like emotional toughness," said Wishnia, author of four books. For Coleman, who used to be a heating oil delivery man, "tough is when you have to go out in the freezing rain."

And tough is writing, they all agreed. There's no magic bullet, said Coleman. "This is our job. You can't just sit there," he said, making the gesture for twiddling your thumbs.
Posted by Lourdes at 10:44 PM 2 comments: