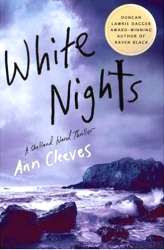 This is Cleeves’ second book in the Shetland quartet, and where the first one left us with the haunting image of black ravens against white snow, this one is set in the summer, where the nights are long and white, because the sun hardly sets. Amid the isolation of the Shetland Islands (very much a closed community), a strange thing happens at a gallery art opening where Perez’s friend Fran is exhibiting. A man starts sobbing, and falls to the floor. When Perez takes him away, the man claims to have amnesia, and has no identification on him. The next day, he’s found dead. Throughout the book, there’s constant mention of another man who went missing years ago, so you know he will soon play a part in the plot. Cleeves cleverly weaves a story about a close-knit community and long-kept secrets. While I figured out who might be the murderer, there was still a shocker at the end.

As murder mysteries, the Shetland quartet is superb. But I also enjoy it for the setting. As Cleeves has said herself, hardly anyone has set stories in this part of the world. While part of Scotland, Shetland has a Norse past that is still celebrated in the annual Up Helly Aa festival, featured in the first book. Cleeves continues to let us look into the lives of Shetlanders in this book, from the fiddle music (to hear it, go to YouTube and seek out Shetland fiddle music) to the shearing of the sheep, described in a beautiful little passage.

White Night was recently released in the United States. The third in the quartet, Red Bones, will be released in the U.K. in February. I highly recommend this series!
Posted by Lourdes at 5:00 PM

These are ceratinly worth looking for. I also enjoyed her Vera Stanhope books.
I liked RAVEN BLACK more than WHITE NIGHTS but I recommend both and look forward to the next.
My review
http://paradise-mysteries.blogspot.com/2008/08/review-white-nights-ann-cleeves.html