The Colorado Kid by Stephen King 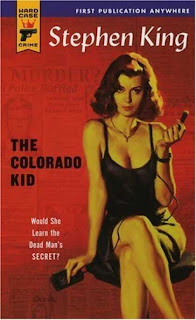 (Warning: Contains a spoiler). Stephanie McCann is a young intern at The Weekly Islander, run by Vince Teague and Dave Bowie, who have been at the newspaper forever. One day, they share the story about the Colorado Kid with her – a man, at first unknown, is found on the beach without identification. He is eventually identified (he was from Colorado), but his abrupt disappearance from work, only to show up later that day in Maine, is a mystery. Teague and Bowie have taught McCann that a good feature story always has “a beginning, a middle and an end.” This novel, however, only gives the reader a beginning and a middle – no end at all, since the mystery is never solved.

While I enjoyed the story during its telling (narrator Jeffrey DeMunn did a great job of capturing the Maine accents and Stephen King can tell a story), the ending left me feeling frustrated, a bit cheated. I’d recommend this only on audiobook, which is how I experienced it, and only after warning people that this book, billed as a mystery and the first entry in the Hard Case Crime series, is not a traditional whodunnit by any stretch. Also, this is most definitely a case of not judging a book by its cover -- this is a most deceiving cover.
Posted by Lourdes at 4:49 PM

I agree with your assessment of the ending: it left me feeling wholly unsatisfied and mostly annoyed. But I couldn't find enough elsewhere in the book to overcome the terrible, terrible ending. I posted a review of The Colorado Kid only my blog recently. Check it out.

I agree with the review posted here. Let me add that I went online to try and email Mr. King himself, such was the enormous level of my frustration at the "non-ending" of this book. The author spends the 180 plus pages setting up a seemingly impossible to solve mystery and then just leaves it that way. Which left me frustrated, annoyed and feeling ripped off of the few hours of my life I wasted reading the piece of junk. King tries the old "it's about the journey not the destination" line in the afterword - but that is what LIFE is like... and the whole point of reading a book (for me at least) is to ESCAPE life for a time. Escape yourself - don't pick up this waste of paper.

I would have to agree with Anonymous, I read books and watch tv shows to escape my annoying life, I get sick A LOT so I read alot. I watch Haven (a tv series based on the colorado kid) so I wanted to know the ending, but since there is none ill guess Ill have to wait...