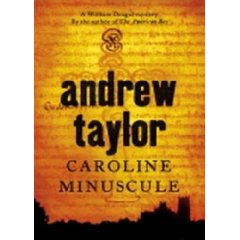 Caroline Minuscule by Andrew Taylor
Protagonist: William Dougal
Setting: England
Rating: 4.5
I hate for a year to go by without having read a Taylor novel, so I went back to his first book, published in 1982. Dougal is a graduate student, the type of person who, upon finding his tutor murdered, walks away without alerting anyone; he doesn't want to spoil his dinner plans with girlfriend Amanda. But soon enough, he's enmeshed in the puzzle that killed his professor; it involves Caroline Minuscule (the name of a Medieval script). The payoff involves diamonds, but Dougal and Amanda have an adversary who will stop at nothing.

By the end of the book, Dougal has undergone quite a transformation. He’s also not the usual detective. As Taylor writes, “in a sense William Dougal is a modified Tom Ripley transposed into a British key.”

It's amazing what Taylor packed into a small novel (234 pages in paperback). This novel, in fact, won the John Creasey Award of the Crime Writers' Association and was shortlisted for an Edgar by the Mystery Writers of America. Taylor went on to write seven more novels in the Dougal series. So while I wait for Taylor’s next book in his Lydmouth series, I will continue to dip into the Dougal books. Taylor has written an interesting essay on his first book here.
Posted by Lourdes at 3:49 PM

Caroline Miniscule is one of my favorite Andrew Taylor's. We've also discussed it in bookgroup. Certainly holds up over time.