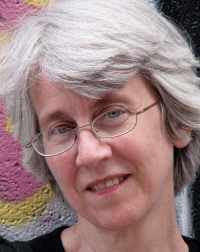 Barbara Fister is the author of three crime fiction books: On Edge, In the Wind and the recently-released Through the Cracks. Below is what she has to say on writing:

Q. In addition to being an author, you’re a librarian at a liberal arts college. Why did you choose that field and have you always had ambitions to be a writer?

A. “Choose” implies actual planning was involved. In fact, I sort of fall into things. I went to library school after enjoying part-time work in the university library when I was an undergraduate and not particularly enjoying the other graduate program I was enrolled in. I applied for a job at a school that I’d never heard of and had to quiz everyone who interviewed me for the job on what is distinctive about liberal arts colleges, since my education had been at research universities. I didn’t really expect to become a professional writer, though I impressed myself in the fifth grade by writing a story about a horse that was a whole eight pages long; when I was an undergraduate I wrote a novel to see if I could do it (a whole 300 pages long!) but I was wise enough to know it wasn’t any good. I didn’t write fiction again for years, until I reached a point in my life when I needed a creative outlet to balance the rest of my life. Making up imaginary worlds is fulfilling in a way that other kinds of writing is not. I’m sure I was also influenced by my father, who was a journalist, and my mother, a self-taught polymath who read mysteries constantly.

Q. How did you come up with the character of Anni Koskinen? She seems far removed from a university librarian.

A. That’s why I like hanging out with her - though oddly enough I’ve had some librarian friends say “she’s such a librarian!” I think that’s because she has an orientation toward politics and civil liberties that maps more closely to the average librarian than the average cop. And she’s a bit of a geek. At one point in Through the Cracks, when she’s looking for connections among cases, she inputs data to create a relational tag cloud - total librarian geekery. She also has a background that provides her with street smarts from early years in the child welfare system, but with a foot in a world that looks more like mine, having been adopted by a college professor.

Q. Much of your first book in the Anni Koskinen series, In the Wind, concerns civil liberties, especially those of underrepresented groups. Why did you address those issues?

A. When I was writing In the Wind I was angry about the ways our government was responding to the 9/11 terrorist attacks, including the passage of a law that in many of its sections is an insult to the Constitution. I was struck by the way that law enforcement practices that were exposed by the Church Committee in the 1970s and repudiated by Congress were suddenly being made legal, or as legal as a law that is in conflict with the Constitution can be. And just as the civil rights movement became the target of illegal surveillance and suppression in the 1960s, even though “communism” was the supposed enemy, the fear of foreign “others” has been expanded to include immigrants of all kinds, both legal and undocumented.

Crime fiction deals with issues of justice, but often it’s justice in the abstract, a duel of wits between a clever hero and an evil antagonist, with victims scattered here and there to create tension. I’m more interested in the ways crime fiction can take a four-inch news story in the paper and imagine the world around it, and I’m fascinated by the ways anxiety (the engine for crime stories) shapes our priorities as a society.

Q. The American Indian Movement, which is a big part of that book, is a real-life group. Why focus on AIM, and were any of the events that occurred in the novel taken from real events?

A. The seed that grew into this story was planted when FBI agents arrested Sarah Jane Olsen, a completely ordinary middle-class woman in St. Paul, and charged her with being an accomplice in crimes committed by a bizarre radical group, the Symbionese Liberation Army, which she had joined decades ago. I wondered what it would have been like to lead a dual life like that, living quietly after being involved in violent radicalism. When I started mulling over a storyline, though, I didn’t want to focus on a group as peculiar as the Symbionese Liberation Army, which was stranger than fiction. Instead, I invented a radical offshoot of the American Indian Movement. AIM was formed close to where I now live and was targeted by the FBI, which made every effort to dismantle and discredit the movement.

I may also have been influenced by the fact that my house is on Dakota land taken from them in the treaty of Traverse des Sioux. Conditions got so desperately bad for the tribe a few years later, they rebelled and there was a terrible slaughter on both sides. On December 27, 1862, 38 Dakota men were hanged in the largest mass execution in the nation’s history just twelve miles from where I live.

A. I’ve always wanted to write something about the experience families have with mental illness, partly to offer an alternative to the fairly common depiction of mental illness in crime fiction as a convenient label applied to monstrous villains who commit extravagantly nasty crimes. My brother Paul was bipolar and, like most people in his situation, was not violent but had frequent run-ins with the law. I know a lot of people with serious mental illnesses, and the problems they and their families have while dealing with any chronic illness are exacerbated by the social stigma involved. Bipolar disorder usually presents during late adolescence or early adulthood, just as people are forming their adult identities, and it can make it very difficult to get an education, develop a career, and form attachments. It’s also frustrating for families, because getting help during a crisis is often impossible. So I invented a heroine whose job in part involves dealing with such crises. Wish fulfillment? I’m not sure.

Anni’s brother is autistic, and I’m not sure where he came from. In the first draft of the book, I never used the word and didn’t really have a “diagnosis” for him. That very messy first draft had a lot of things that needed fixing, and one of the recommendations my agent made was to cut back on the number of characters. I tried to write him out of the story, but I couldn’t make sense of Anni’s character without her brother, so he stayed and I’m glad, because I like him. I think her ability to understand his perspective even though he’s mostly non-verbal has helped make her a good detective and a compassionate person.

Q. You also set your books in neighborhoods that aren’t usually seen by the tourist. What about these settings appeals to you as a writer?

A. Man, I love Chicago, and the city is all about its neighborhoods. As a quintessentially American city, it offers the kinds of contrasts that give you lots to work with, including vibrant African-American and Latino communities as well as the lingering imprint of waves of immigration, particularly from Eastern Europe. The busiest retail areas in Chicago apart from the better-known Magnificent Mile are 26th Street in Little Village, a Mexican neighborhood, and Devon Avenue on the far north side, which is primarily Indian/Pakistani but with smatterings of Russian, Georgian, and Hassidic Jewish businesses. How cool is that? And of course there’s enormous economic diversity. Many of the city blocks in parts of the South and West Sides would be right at home in the third world. Anni lives in a neighborhood that’s traditionally Puerto Rican, but also has lots of black and Mexican residents. It’s right in the path of gentrification but is also home to some pretty violent gang disputes. If fiction needs conflict, there’s plenty of it right at her front door.

Q. You now have two books in the Anni Koskinen series. Are you working on a third, and any ideas on where this series will head?

A. Yes, I am, but no, I have no idea where it might go, though at this point it involves two stories, those of a young schizophrenic client accused of murder and an outsider artist whose rather unsettling work may provide clues in a case Anni investigated years ago. I am one of those writers who works with a concept and sometimes an idea of how the crimes will be solved in the end, but otherwise no outline or plan. I’ve never been able to plot a story in advance of writing; I have to be writing to discover the story. Don’t try this at home.

Q. You’ve been active in the mystery reading community for years, especially as a moderator with the online group 4Mystery Addicts. Any surprises in going from being a reader to being a writer?

A. I think at heart I’m more a reader than a writer. When I’m making up a story, I’m thinking like a reader. What’s going to happen next? How will this character respond? I was completely ignorant of the book business, and while it has been a good education for me as a librarian to see the sausage factory up close, particularly at a time when so much is in flux, I have been surprised at how much time and energy the business angle of writing occupies writers and how much of the creative energies of writers gets sapped by anxieties surrounding publication, particularly when so little is under their control. While I enjoy the craft aspect of writing, I’m not as interested in the business end, especially sales and self-promotion. Fortunately, I like my day job.

Q. You’ve written both male (On Edge, your first book) and female protagonists. Which do you like writing the best?

A. I actually found it harder to write from a female perspective. Readers tolerate a certain intensity and edgy behavior in men that would seem obnoxious, unrealistic, or simply disturbing in women characters. Men can drink too much, but not women. Men can get obsessed and neglect relationships, but women who do that are selfish and overly ambitious. When you put a female character at risk, it’s easy to fall into that annoying “be very afraid” kind of suspense that I find oppressive. I had fun with Slovo in my first book, and I’d like to bring him back and see how he’s doing after all the high-tension drama and his slightly unhinged state of mind, but I also have enjoyed trying to develop a female character who can be the kind of hero Chandler wrote about – honorable, not afraid, fit for adventure while remaining solidly human and rooted in reality. I think with Anni I’m trying to figure out what a hero should be when the hero is a woman in the 21st century.

Q. Finally, the question I ask all authors -- which authors do you like to read?

A. My favorite question! I have been enjoying Scandinavian writers lately – Arnaldur Indridason, Johan Theorin, Jo Nesbo, Karin Fossum among them. I also love Denise Mina (Scotland), Timothy Hallinan (Thailand), John McFetridge (Canada), and Deon Meyer (South Africa). For great writing I can always turn to David Corbett, Jess Walter, and John Harvey. Oh, and Sam Reaves and Sean Doolittle and Don Winslow and Minette Walters and Alex Carr and Adrian Hyland and . . . it’s impossible to know where to stop. Whatever you think of the future of publishing, there is no shortage of great books.
Posted by Lourdes at 1:13 PM

Email ThisBlogThis!Share to TwitterShare to FacebookShare to Pinterest
Labels: Barbara Fister, In the Wind, On Edge, Through the Cracks