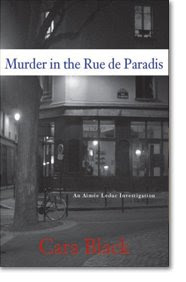 A reviewer once compared the Leduc series to Kinsey Millhone, and it's not too far off. While Aimee is much, much more fashionable (this being Paris, after all) and she has a sidekick to get her out of trouble, fans of Kinsey will probably also enjoy this series, which gets better with each book. In Murder in the Rue de Paradis, the eighth in the series, Aimee's on-and-off-again lover, Yves, returns to Paris and asks Aimee to marry him. She says yes, but after one night together, Yves is murdered. Although police are investigating, they're also hiding something from Aimee. As Aimee investigates, this becomes a story about Kurdish and Turkish politics, and a sleeper jihadist sleeper cell that is scheming an assassination. Black manages to pull all this off, along with a surprise twist at the end.
Posted by Lourdes at 12:31 PM

Glad to hear you enjoyed this one. I chatted with the author for quite a while at BEA, and I've been interested in reading her work. Thanks for the review.