A Cold-Blooded Business by Dana Stabenow 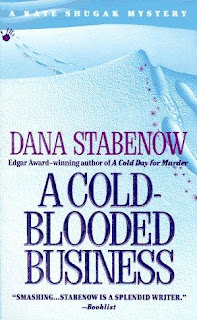 Kate Shugak is hired by a large oil company to investigate who is bringing drugs into the camp. She goes undercover as a "roustabout," quickly finding out that drug use is indeed rampant among the employees. She stumbles onto the bad guys partly by detection work and partly by luck. While the plot is thin on the detecting, we forgive Stabenow. I read her books mostly for the descriptions of Alaska and the native culture.

This is a series I recommend reading in order. The first one, A Cold Day for Murder, begins Kate's career, when a park ranger and an Anchorage investigator, goes missing. In the second, A Fatal Thaw, a mass murderer shoots up eight bodies. But a ninth person appears to be killed by a different rifle. In the third, Dead in the Water, Kate goes undercover on a crabber ship, to find out what happened to two deckhands that disappeared. Each book, so far, has been set in a different locale. Whether it's a large national park or the confines of a crabber, Stabenow succeeds in showing us another part of her state each time.

Stabenow herself sums up her 16-book series in this cute YouTube video. Be forewarned, though -- there is one spoiler.
Posted by Lourdes at 12:17 PM