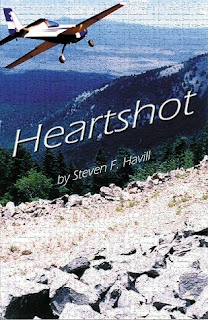 Heartshot by Steven F. Havill (first in the series)
Protagonist: Undersheriff Bill Gastner
Setting: Posadas County, New Mexico
Rating: 3.7
This series is refreshing in that it features overweight, cigarette-puffing, retirement-age undersheriff Bill Gastner (the sheriff is mostly a political job; the undersheriff does all the work in fictional Posadas County) and a young Latina detective, Estelle Reyes, as his sidekick. In this debut, the sheriff’s office finds itself dealing with a major drug problem, one that has killed several teens. Gastner ends up in the hospital – not because he’s shot at, stabbed or otherwise hurt in the line of work. It’s his heart. His bad heart becomes key at another pivotal point later on – you can see it coming, but the author pulls it out with a nice scene. This book had its faults – one being that the bad guy is easy to spot, early on. Still, it’s a series I’ll continue.
Posted by Lourdes at 11:13 PM