To the Power of Three by Laura Lippman 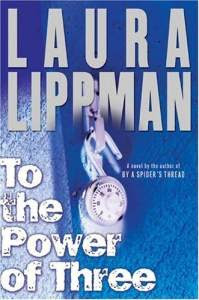 To the Power of Three tells the story of three teenagers – Kat, Josie and Perry – best friends since third grade. But something happens the summer after their junior year, and Kat and Perry become estranged their senior year. Then, on the last day of school, Kat is shot dead in a high school bathroom. Perry, the suspect, is critical after shooting herself. And Josie is apparently the only witness, but she’s sticking to a story that has huge holes in it. She’s pressed by Sgt. Lenhardt, who (unfortunately) does not have a greater role in this story. The novel unravels slowly, going back in time to third grade, showing us the bonds that held these girls together. Lippman captures the essence of the teenage years spot-on. But this book, which I’ve heard highly praised, fell flat for me. There were too many peripheral stories that detracted from the main story and, worse of all, the resolution was anticlimatic. In the end, I was disappointed.
Posted by Lourdes at 11:10 PM

Email ThisBlogThis!Share to TwitterShare to FacebookShare to Pinterest
Labels: Laura Lippman, To the Power of Three