The Savage Garden by Mark Mills 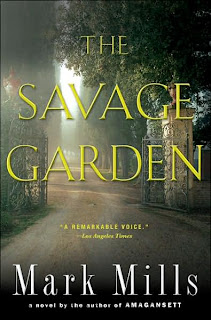 
Young art scholar Adam Strickland is sent to Italy by his thesis adviser to study a Renaissance garden built by a Florentine banker in memory of his wife, who died in 1548 under mysterious circumstances. The garden, filled with statues, a temple and grotto, is indeed interesting as art. But it becomes even more interesting when Adam hits upon the key to deciphering it: Dante’s The Divine Comedy – the nine-tiered garden is modeled on the nine circles of hell. Following the clues, he suspects that the banker, Federico Docci, may have killed his own wife, Flora, for having an affair. But this is not the only mystery.

At the Villa Docci estate, Adam begins to suspect that one of Signora Docci’s sons may have murdered his brother. Although the family has always said that Emilio Docci was killed by German occupiers at the end of World War II, the stories don’t add up. The third floor of the house, where Emilio was killed, has been locked since the murder. Eventually, Adam unravels this mystery, as well, although we get a little twist at the end.

Also recommended: Mill’s first book Amagansett, a mystery set on Long Island just after WWII.
Posted by Lourdes at 11:46 AM

This sounds interesting. I like a mystery with something a little different in it.