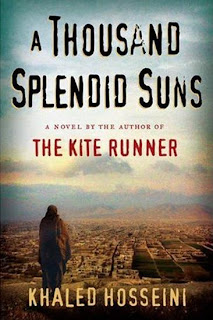 This, the second book by Hosseini, follows the fate of two Afghan women. First, we meet Mariam, who is married off after her mother dies. Her father, who has legitimate wives and children, refuses to take in Mariam, daughter of a house maid. Mariam has an unhappy, abusive marriage after she continually gets pregnant, only to miscarry and then suffer beatings by husband Rasheed. We meet Laila, a teenage girl, in Part 2. Her childhood friend and lover, Tariq, begs Laila to marry him and leave Kabul with him and his family as violence escalates. But Laila stays with her parents. Shortly after, a rocket hits their home, killing both parents. Laila is taken in by neighbors Mariam and Rasheed. Yet for Rasheed, it is not an act of kindness; he wants her for his second wife. When she’s told that Tariq and his parents have died in a bombing, Laila, pregnant with Tariq’s child, finds herself with no choice but to marry Rasheed. This book tells the bleak story of women in Afghanistan – from being forced to wear burqas to not being able to leave the house without a man. The book’s bleakness does not abate until the end.

Hosseini’s first book was the huge bestseller The Kite Runner, which focused on the relationship between sons and father, and on atonement. Both books have their camps – those who think one book is better than the other. Personally, I prefer The Kite Runner, although Splendid Suns is still a strong book with a powerful message.
Posted by Lourdes at 11:26 PM

I haven't read either book, but both sound intriguing.

Nice review. I've read both and enjoyed them both for different reasons. I think they are both stories that should not be missed.